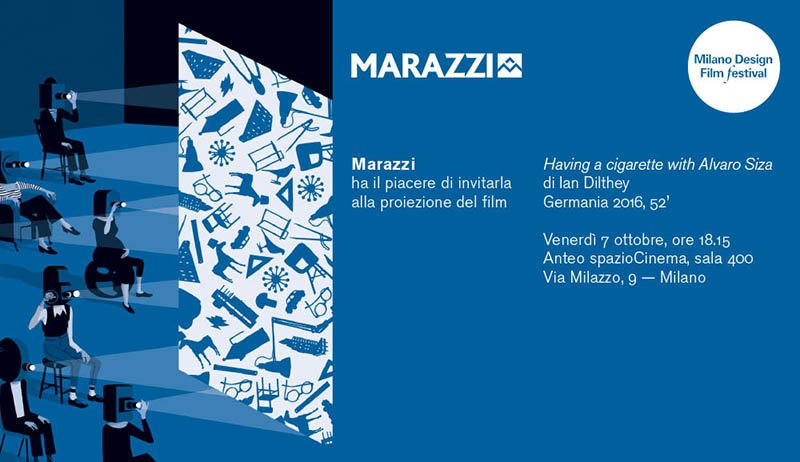 For the fourth consecutive year, Marazzi is again one of the partners of the Milano Design Film Festival, promoted by Milan City Council to coincide with the city's Fall Design Week.

Marazzi will be presenting the German film “Having a Cigarette with Álvaro Siza”, which recounts a conversation with the Portuguese architect Álvaro Joaquim de Melo Siza Vieira, one of the greatest of our time and recipient of many awards and honours including the Pritzker Prize in 1992, the Wolf Prize in Arts in 2001, the RIBA's Royal Gold Medal in 2009 and the Career Golden Lion at the 13th International Architecture Exhibition in Venice in 2012.

The film, directed byIain Dilthey, is an intimate account not only of the great architect's life but above all of his vision and thought, as he ponders on the meaning and aims of architecture.

Its association with the Milano Design Film Festival is one of Marazzi's initiatives in the area of design and architecture, which go hand in hand with its product development work and the constant dialogue with a variety of disciplines and cultures it has maintained ever since its origins, not to mention its partnerships with top artists, designers and architects.

The Milano Design Film Festival will be held at Cinema Teatro Anteo, Milan, from 6 to 9 October. "Having a Cigarette with Álvaro Siza” is scheduled for screening at 6.15 pm on 7 October and at 10 pm on 9 October.